skip to main | skip to sidebar

Here we are in August

So, it's kinda a minor peeve of mine when everyone posts on facebook or whatever at the end of the year that they are so happy the year is over because it sucked, etc, and that next year is going to be so much better.  I don't know why it bothers me, it's just a little slight thing, but it does.  I've had years that seem harder than others, and it just hasn't been something I've felt inclined to say.  But, 2015, you suck.

As you may remember, my company sold its asset (the hotel I worked at) in May of 2014, just as I accepted my dream job/promotion.  I muddled through, and worked extremely hard for the new company, only to find out that they had no intention of keeping me on, and my job would end in December.  I was happy to accept a position in January with the former company, basically running things, but of course on a lower level, since the parent company was now without its main asset and employees, but things still had to happen.  That is the job I am in now, which has been really great logistically in a lot of ways, but isn't necessarily my dream work.  I am happy with it overall though.  But it's been a strange transition.

In March, I found out I was pregnant.  I was sort of stunned.  We had generally planned on having another child; four has always seemed like our number.  We had some timetables in place, and thought it might be slow going; it took a year longer than we thought to get pregnant with Hannah (which ended up being the hugest blessing ever, by the way).  We most certainly didn't expect to have a surprise pregnancy when we were trying not to get pregnant.  But, it was what it was.  I was a little sick, but not horrible.  Mostly I had a bad attitude.  I had to wrap my mind around having a baby in the same year I was in, due November 20th.  My babies were going to be just barely 2 years apart, which was a closer gap than I had planned.  Four babies by Christmas.  And my aforementioned job had only been negotiated through December of this year, and nine months pregnant or on maternity leave isn't really the easiest sell to an employer... But, I worked through it, I cried with some friends, and started to feel excited.  The sickness prompted us to tell the kids a little bit early, because I was suddenly throwing up and napping by turns.  They were over the moon, especially Charlie, who made demands for a brother.  I was starting to picture the new life I would have.

Probably, if you've seen me lately, you can guess that the pregnancy didn't quite get through the first trimester.  All things considered, the miscarriage wasn't as horrible as it is for some.  I had a little touch of that which sometimes comes when the hormones in your body go crazy for 9 or 10 weeks, and then take a nosedive, but nothing too serious.  I feel really lucky that I have three healthy kids, and all my other pregnancies have carried to term.  I think when you miscarry on your first pregnancy, it makes it frightening to even want to get pregnant again.  I do feel really lucky.  But, I can't deny that it was sad, and hard, and.... weird.

The day after my miscarriage, I got a call.  A friend of mine (who I had just called and told of my pregnancy a few days before, and we had a nice talk) took her own life, after suffering from a very debilitating postpartum illness.  She was 27 years old and left a husband and two very small children. Words fail.

Other friends have been facing intense illnesses, depression, illness of children, loss of employment, needs to relocate, so many other things.  I was helping out here and there with a few friends in need, and I feel like my own problems were and are so minor in the face of the things my wonderful people are facing with grace.  I am so lucky, so blessed.  But, man, this year has been a rough one.

I've never been sure about sharing this kind of thing.  I've seen others share it, and wondered about their gumption.  But I just feel like I want to get it out of the way.  It's maybe too much.  But it's what's real.

I have always enjoyed blogging, and I want to get back in the swing.  But I wanted to get this weird year in perspective first.  There's still lots of time for this year to make a come back.  We've had a really nice summer.  In a few weeks, Flissy starts Kindergarten, and Charlie 2nd grade.  Hannah has her second birthday in October.  I have a big birthday coming up.  Our 10th anniversary in December.  It will be a year I remember bittersweetly, as with many of my years.

In general, we are glad. 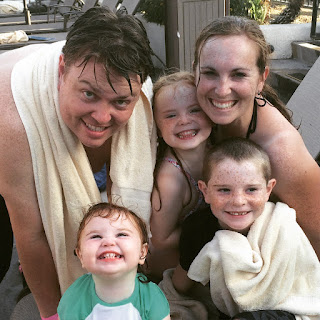 Oh man! What a year. It HAS been a ridiculous year and I'm not sure why. Here's to it ending on a higher note!

Thanks for sharing your struggles and rough times. I have had so many years that I was really glad to put behind me. Yet as I get older, there are only 2 or 3 years that stand out in my mind as "bad." Even then, it wasn't really the whole year, just a period of time that was painful. I hope the rest of 2015 makes up for the difficult patches you've had so far! Love you Rachel!

Hi Rachel! That was a heavy year. I'm so sorry about your friend's death and your miscarriage. I'm glad you shared, and I hope it helped a little. Best wishes for the rest of the year!

Rachel - I am so behind with blogging that I haven't read any of my friends' blogs in awhile. I am so sorry that you have had so many experiences this year, especially the miscarriage. Hang in there, girl! You have an amazing spirit and zest, and I know you will see miracles happen soon. Love ya tons! NO ME DIGAS! :)

Love this. You write your emotions so well and it is definitely worth documenting. Every part of our life is worth recording as we continue on, to later reflect upon how far the Lord has brought us. This is your year!